Iceland is a stunner for waterfalls. This location called Hraunfossar, Barnafoss is not so far from Reykjavik, just an hour drive or so. Amazing fact about this place is that beautiful streams of water emerge from under the edge of lava field. Beautiful shiny morning, icy paths that I had to manoeuvre around because I didn’t manage to buy crampons in Dubai.

It was in fact our first real shooting location, so I was a bit overwhelmed. There was a stunning waterfall view on one side but it was against the sun, so I tried to apply all the techniques I learned about shooting into the sun. I was told that graduated filters help in this case, but I don’t owe any yet. Excited to try one day. This is what I managed to get out of that side. I am not so happy with the skies, and the blue cast on the snow, but in general   – not so bad.

Roamed to the perfect shooting point when it was time to leave already. Wish I had a bit more time to set up the composition nicely, but again – just our first day with Dream Photo Tours. So much to learn still. Even though I won the trip because of my photo, I am far less experienced in these things than some of my friends on the group.

And I know about focus stacking and bracketing, but sometimes when you are overwhelmed with beauty around you, you just forget. Or forget to think about the best composition possible. I guess it comes with practice.

The most impressive thing in that place was I must admit, the bathroom! It had a huge heater inside… in a place in the middle of nowhere, where even the gift shop was closed! Maybe it’s not a big deal, but for a person from Russia it is.

I think I had a bit too much coffee today, feel agitated and pumped up. About coffee in Iceland, by the way, unless you want to spend lots of money on those pretty coffees in coffee shops on your way exploring the island, bring a tumbler with you and fill it with coffee at breakfast. Will keep you warm at least half of the day. It also fits snuggly in the photography bag as your telephoto lens. Just make sure that your tumbler doesn’t leak.

Another advice would be even if you go to Iceland in winter time, don’t forget to bring sunglasses. The sun can be really bright, especially with all this snow reflecting in your face. One guy called Chris on our group even looked very tanned after the trip, caught all the possible sun in his face.

After we finished with this fabulous location that I’d like to visit again provided the chance, we sailed off in our glamorous yellow bus towards the West side of the island. Made a stop in a supermarket to get some provision, and it was just so funny how my American pals were asking me if I saw any ready-made sandwiches on sale. And in Iceland they don’t really sell those in the supermarket, you have to make your sandwiches yourself. Such American mentality… haha. No offence, though. Buy your food from Bonus shops with the little piggy on the logo, it’s quite cheaper there.

Next to our Bonus supermarket there was a coffee shop that we all eventually found ourselves in. There were photos of Papa Jones Restaurant on the walls, and I was wondering why, when the super friendly owner lady came up to me and told me that it’s that place where Walter Mitty went to Papa Jones when he was in Iceland. Well of course it was! I wanted to share this fact with my friends on Snapchat when Patrick Di Fruscia, yet again, started to make fun of me being the young one obsessed with social media (and he has a point), and I don’t know if it was a part of the joke or if he was serious, but he kind of told me that he didn’t allow me filming him… so I was blushing and didn’t know what to say, so I just went out and took this picture right where Walter Mitty was standing and talking to his colleague on his prehistorical phone.

Later that day we stopped at an absolutely beautiful location at someone’s farm with a burnt down house. I fell in love with this place too, all the lines of the place and the contrast between the colour of the skies and the colour of the grass. Perfection! 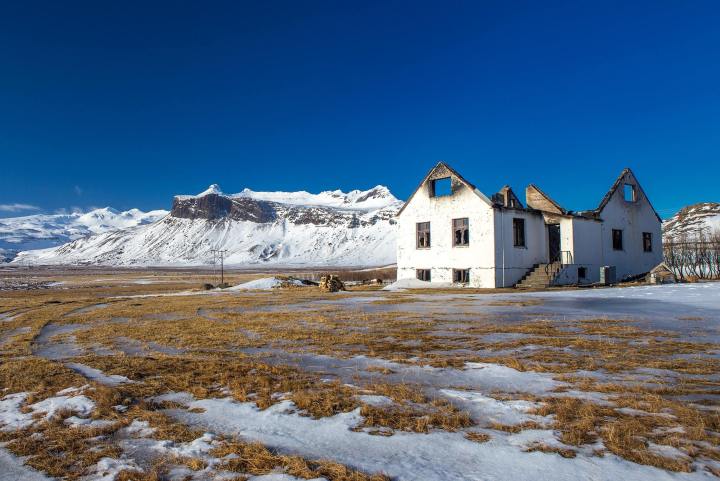 Hope you enjoyed this day with me, beautiful people.