Part two of Vietnamese adventures follows. After we had enough of Saigon, it was time for us to go explore more of Vietnam goodness. As we had absolutely no plans or reservations, we decided to join a few guys that my husband met online. They were having a good time on the beach of Mui Ne, so this became our next destination. Living in a relatively small country, we were forgetting again that Vietnam can’t be crossed in one day and even going to this beach destination would take us a few hours. Precisely from 5 to 7 by bus, as the bus company announced. Nothing is too sure in terms of timing in this country. We decided to splash and buy the “comfortable” version of the bus, that had beds instead of seats.

I can’t say that this was more comfortable option, but what is important that we made it in one piece to our destination.

Mui Ne is as it turns out quite a popular destination for backpackers. A few individuals of that type were getting quite hyped at the end of the bus, shouting at every sign of a new urban dwelling “Mui Ne?!” until the bus driver got mad and started shouting NO NO NO NO NO. I can’t say that he was a very well-tempered man before they started annoying him either. He had a habit of overtaking large chunks of traffic at the traffic light, and one time got overexcited and got the side mirror smashed by a truck. Whoa, bit scary.

So we are finally in Mui Ne, it is raining and the bus just left us somewhere sort of in the vicinity of the hostel we were staying. Thankfully, we had the sim card and could find the location easily. It was just up the hill. And when you think that it is already quite up the hill, there was some more up the hill. Checked in, read the rules and regulations, that mentioned absolutely no sea food in the room or you would be punished financially by paying 1 million dongs. As harsh as it sounds, 1 million dongs is not such a big amount of money. As there was no cooking appliances, I am not sure how one can even cook seafood. Anyhow, we refrained from doing that.

Found our new friends at the bar, they have had consumed a few buckets of alcoholic beverages and were ready to take part in all the numerous entertainment opportunities provided by the establishment, namely playing flip cup (the motto of this game is “why do we play flip cup? to get fucked up!”), the ever popular beer pong and a few others. We preferred to be on the observing part that night, and I made plenty of crazy photos of that night which should not be shown to any of the mentioned personas’ mothers.

The next day we woke up kind of early. It is pretty hard to sleep in Vietnam anyway, because Vietnamese for some reason get up super early, and start actively build stuff and hammer stuff starting from 6 am, they also need to phone everyone and talk loudly. By 9 am all these kind of activities slow down. Anyway, we took a pretty decent breakfast in the hostel for 2 dollars. The coffee in Vietnam is dope. It is very tasty and quite strong. Just the way I like. 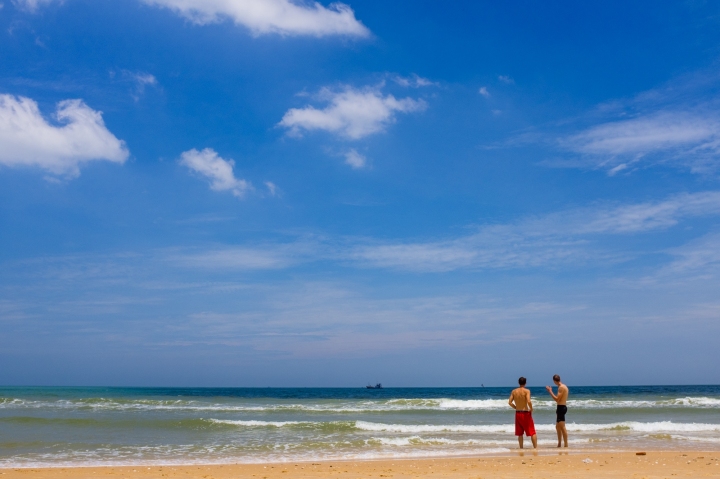 After breakfast we went to explore the beach which was quite much deserted and we enjoyed this fantastic beach by ourselves. Also at the same time the sun was enjoying roasting us, so we all got a premium sunburn in just a few hours despite applying the cream to our white skins. 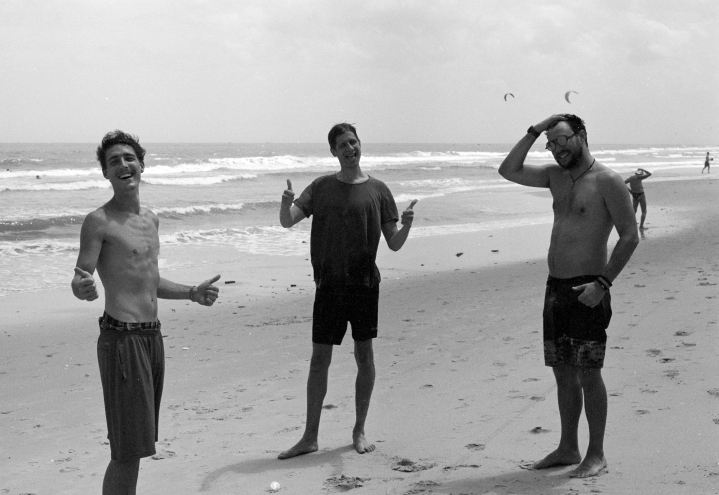 In the afternoon, the boys got somehow involved into a pillow fight competition. Not just a pillow fight, but on a metal pipe over a swimming pool with wet pillows. That was a sight to behold. The guy who won the epic battle was doing detox that month so the beer tower he won, he decided to share with us. Good question was why did he take part in this competition at all. His name is Nick and he is a 19 years old backpacker from Germany. 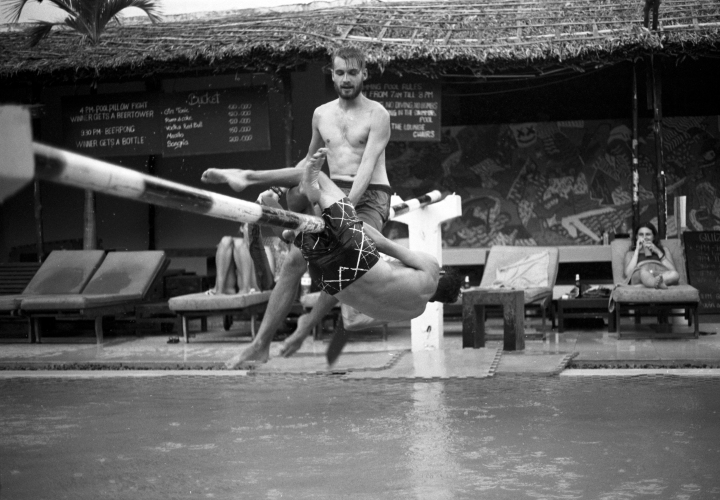 The guys that we made friends with were from Germany too, but they didn’t much like Nick. I had a good time talking to him. He was travelling at that time with Pete, who is a British guy changing jobs every couple of years and taking backpacking trips in between. They both had so many great stories to tell, we spent as much time talking as we could. One good thing about hostels is finding interesting people. When you stay at a fancy hotel,  everyone is on their own. Backpackers are much more open community, and usually it doesn’t take long to befriend somebody.

So after spending two nights in Mui Ne, it was time to move somewhere else. We bought tickets on a night train to go to a place called Danang. 14 hours in a train.

For an average Russian this doesn’t sound like a lot of time in a train, but ze germans and zi french were impressed. The train really reminds a lot a Russian train, but everything is made for smaller people and instead of 2 sleeping rows of shelves, there are 3. 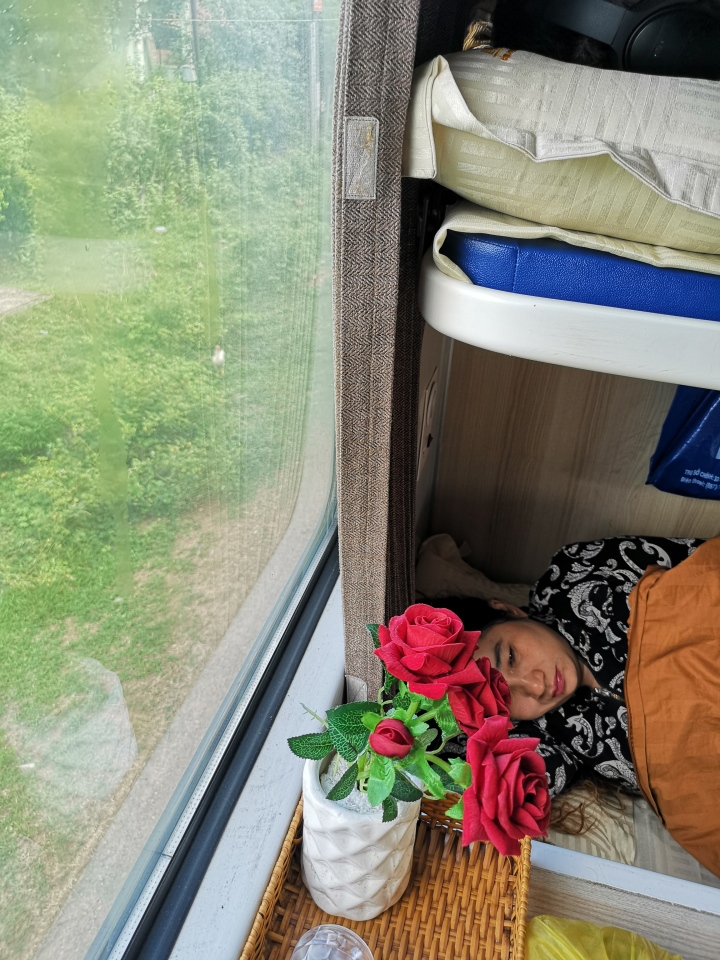 We were like the only people of European origins in this train and the Vietnamese were looking at us with suspicion. Around 6 AM everyone got up, started calling other people on the phone… there was even a chicken in the train, I didn’t see it, but I heard it. 14 hours were feeling quite long… but eventually we made it to Danang. The beautiful city of Danang with its Dragon Bridge and the Marble Mountain. That is however a story for the next time. 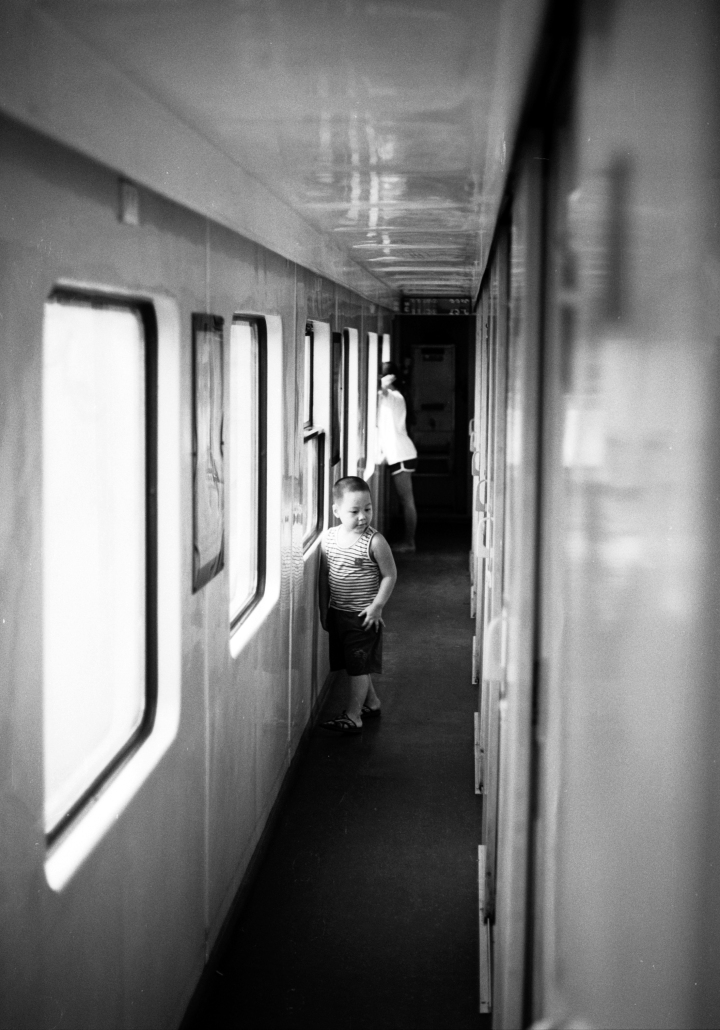