A lot of travels happened, a lot of pictures taken, but today I wanted to talk a little bit about that Sony camera that everyone is obsessing about these days. That Sony 7 R ii.

As a matter of fact, I am a Fujifilm shooter these days, and I can’t be happier with my choice. My old good friend Canon, after being fixed, is collecting dust in a cupboard, but not completely forgotten. So why even looking in Sony’s direction, you might ask? Well, you know, photographers often get so gear obsessed, so that just by watching another youtube video they think they absolutely need that thing in their lives. That is not what happened to me. I have to teach a class during a photography week event and that class is sponsored by Sony, so I can’t shoot with anything but Sony. And I have no idea how the menu works (as well as a lot of people who are shooting Sony every day to be fair), so I borrowed one for the weekend.

I also got 24-70 F 2.8 lens, which is so big and heavy that it kind of defeats the purpose of “lightweight” mirorrless camera, but anyway, few of us actually pick up camera gear considering the weight factor.

When I turned this baby on, the first thing it said:  “Running on NTSC”, which I had to ask my friend to explain why the camera is panicking about this and thinks I need to know this as the first thing when I turn it on.

Then came the fun of trying to find anything in this menu. It is not such an easy menu to familiarise yourself with. I guess no camera menu is perfect, and it took me time to get used to Fuji, and some things on Canon menu I discovered like 3 years later, but the first thing that Sony menu proposes is to turn on zebra. Really? The first thing? And when you’re not in the know, what the hell is Zebra? I mean when you start turning it on, you will figure out that it is the highlights clipping feature, but why would it be the first thing on the menu?

Right, then let’s find out how do we change focus points? Took me 25 minutes until I found the way to do this. So … so much easier when you have a “nipple” or “joystick” to do that, but I guess when you get used to this one, it’s a viable way of operating the camera. Yes, you can download a manual from the Internet, and it will somehow save you some time, but what about being user-friendly?

Anyhow, I borrowed the camera from my office, they gave me a very nice lens, the only thing was that I didn’t have a photographic project, so I just went roaming around looking for something to shoot.

My husband was on a car meeting, and this guy just came in the frame perfectly.

I don’t like the shutter sound of Sony camera at all. In my Fuji you can choose the one that you prefer out of 3 different sounds. In Canon or Nikon, you get what your manufacturer offers you. In Sony it’s somehow this squeaky sound that doesn’t sound appealing at all. But you can switch it off and go to silent mode. The bitrate of the photos goes down a touch, and some features are not available, but how beautifully it works for the scenes like above. People still see you with the camera of course, but you become so much more discreet.

I also loved the feeling of the camera in front of my face. It kind of separates you from your subject like a shield. It is not the same feeling as with Fuji, because not your full face is covered by it. People still see your face, but in case with Sony they don’t. Weird fact, I know.

Everyone is talking about Fuji colours, but I always shoot in raw, so I adjust colours afterwards anyway. I like how the colours came out in these photos.

A couple of times in the bright sun, the camera would show me that the exposure is okay on my subject, but the final images turn out way overexposed. I don’t know why is that. It was the case both for spot-metering and for center-average.

I got lots of likes for the photo of this desert on Instagram. Beautiful separation, and here you can feel the power of the full frame.

I also managed to make this kind of creative shot – reflection of the coffee cup in my husband’s phone at F 2.8. 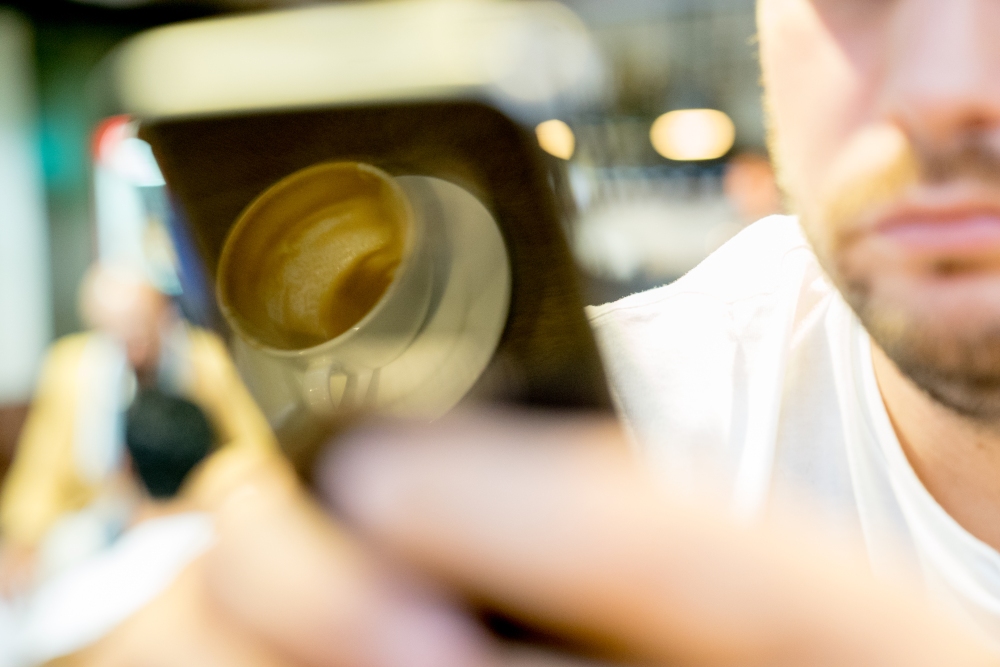 So I started with the rejection of the camera, but finished with thinking that I could live with it.

Do you love it?

One thought on “Sony 7Rii”