So one of those must visit places in Iceland is this magnificent Jokulsarlon Glacier Lagoon beach with black sand and gigantic pieces of ice just lying around.

Although the first time we arrived there, there were no pieces of ice and it was raining like it’s the end of the world. But I saw some cute seals, that I quite liked, but nobody else wanted to take pictures of seals. It was so good to be wearing my goretex jacket and not be getting wet under the rain… how did I live without this thing in Russia?

The second time went around Jokulsarlon it was a beautiful sunny day, and there were plenty of pieces of ice. We had a great lunch full of arctic char (literally), and some fun bathroom stories. Denny put on his fancy waterproof boots, and we were all cheerful and happy to be there. But you don’t joke with the sea in Iceland, it can lure you and trick you into doing stupid things… and then it strips you down and laughs at you. So we were all mesmerised by the ice, roaming around, looking for the perfect shot, that we forgot to keep the distance… and as Kris told me not to leave my backpack on the ground in case I need to run from the wave, I thought he has a point, but I forgot to run. And as I looked at that big junk of ice in front of me, holding my tripod in place, I got swallowed by the sea, and hit by that very piece of ice I was trying to take picture of.

And then yeah, you were half-body immersed in the sea, and yes, you have waterproof pants, and jacket, but no matter what – your shoes are full of water, and whatever you have underneath those pants is full of water. Hopefully your camera is safe, but full of sand, and everything is going to be full of this black sand for days from now on… and outside it is still around 2 degrees (40 F), and we are here until sunset.

But you go to the bathroom and try to dry yourself, and then you realize nothing is going to help you, so you just roam back with your shoes making that sounds… if you grew up in Russia, you know, because every mid-season you have your shoes full of water. That nasty feeling…

And then you see all your friends in the same state really, because everyone but one got hit by the same wave, or the next one. Patrick left his shoes in the hotel, gave up on the idea of drying them. But I made it till the end of the day, and maybe my mind wasn’t sharply concentrated on taking photos, but I had fun… the sunset wasn’t spectacular, but it was just nice to be there. It was a special moment, and I love this place so much. 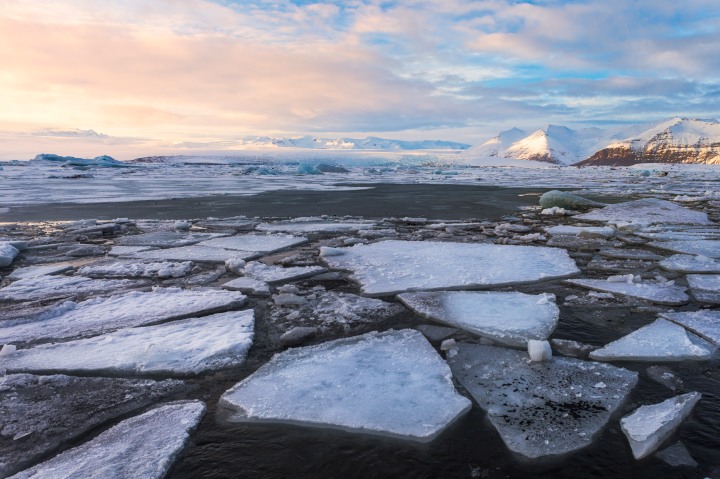 Even if you don’t take pictures, watching these pieces of ice slowly drifting around is so relaxing. I wish we were there when auroras were dancing in the sky.

I was surprised I didn’t catch cold, but to make sure I took a couple of shots that night at the hotel. It was the third and the last night we stayed there, and the wifi was so bad in the room, you had to go hang out in the common corridor to catch some signal. Very conveniently Kris was there with his bottle of scotch. His catch phrase was that you can deal with anything, if you add “with scotch” at the end of the phrase. Like oh, there is a girl in my bed “with scotch”. God bless.

More arctic char, and I believe we were brave enough for fermented shark that night as well…

The next morning was a beautiful sunny morning with a stunning sunrise, that we missed.

We ran out in our pj’s with Emily trying to take pictures of whatever we can. Those heaps of hay look like camels sleeping at sunrise.

After breakfast we went back to the Glacier Lagoon again, and the weather was absolutely beautiful. It was even so warm in the sun that you could suntan.

And we roamed around the big pieces of ice being wary of the waves, and I screwed up some good otherwise photos because it is not a good idea to have polarisers when shooting into the sun. Nobody got wet this time.

We laughed, ran away from the coming water. Pat took this magnificent picture of me surrounded by 1000 year old ice.

Didn’t want to leave… but couldn’t stay there forever as well.

Here is a picture of Pat as well trying to catch a piece of ice for another fantastic shot of his. Yeah, I know, his backpack is bigger than him, but size doesn’t matter, right, girls? 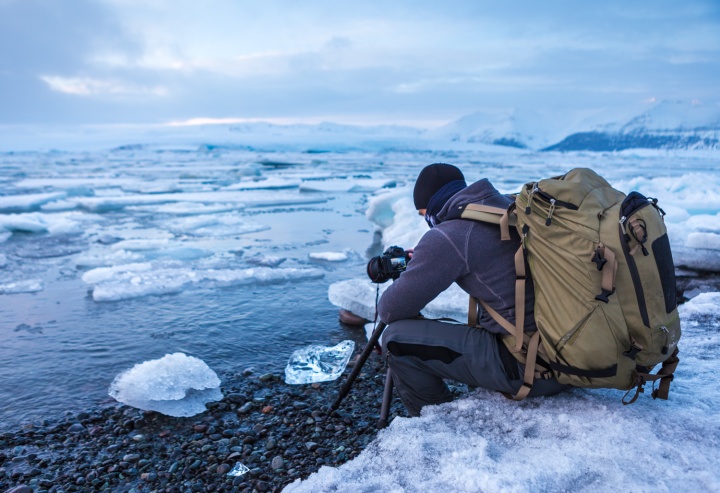 Have a great weekend!

One thought on “Jokulsarlon Black Sand Beach or How I got Kissed by Atlantic Ocean.”